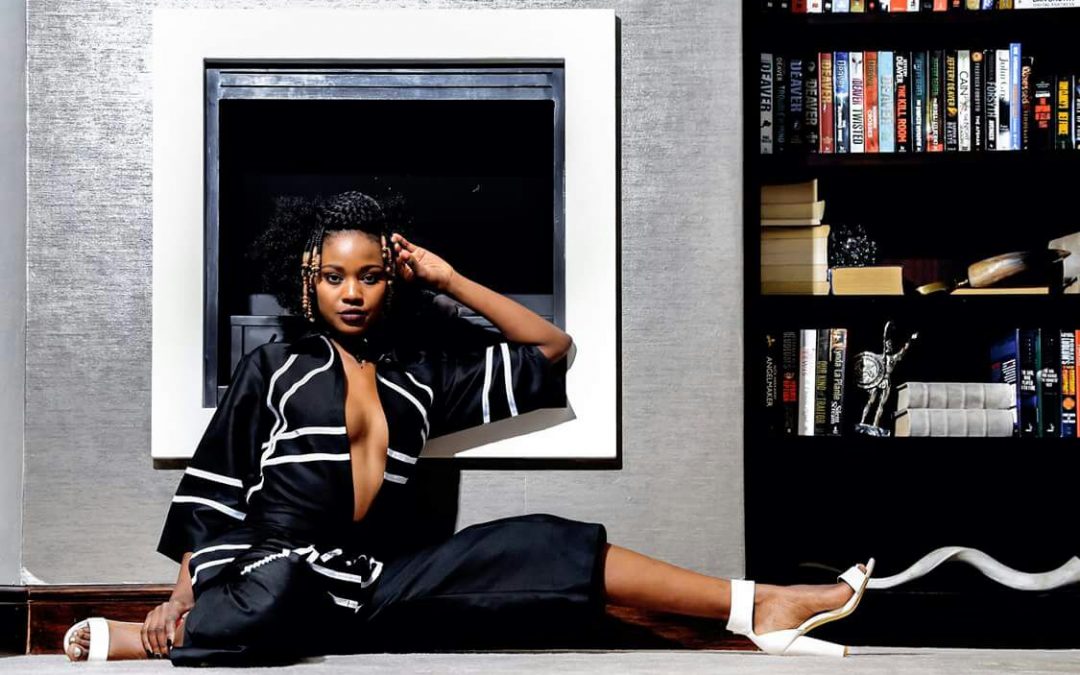 Reigning Miss Free State Queen, Lungile Carol Mazibuko was born in Harrismith and grew up in Qwa Qwa, both in the Free State. She’s the second born from a family of five. She attended Retief pre-school in Kestell and then she moved to Ed-U College until grade 4. In grade 5 she moved to Bloem where her mother had moved to 2 years before and she went to Calculus, Roseview Primary and started her high school career at Eunice Girls High.

Her love for the spotlight started in pre-school when she started dancing at Retief. She loved having to wear heels and dressing up and eventually she started competing in pageants but says she never really won anything then. In Roseview one of her teachers started to groom her for modelling and that’s how she fell in love. Her parents didn’t really mind the modelling in the beginning, however in high school as it started to demand a lot of Lungi’s time and attention, that’s when they started to have a negative view of it. “There were more opportunities. There were photoshoots and certain clothes they didn’t like and it didn’t make sense to them, especially the time I spent modelling. They didn’t think it makes money or that it’s a career or a path that one can venture into and live like that” she says.

In high school from grade 8 to 11 she only did pageants and in matric she didn’t do any modelling at all because it demanded too much of her time. In matric she discovered that she might have a learning problem. “I didn’t know what it was but I knew I had a problem. Luckily I had a friend who would assist me in reading and writing, in matric. I passed very well because I had someone who was assisting me. Only when I got to varsity did I discover that I have dyslexia.”

“Of course I was very disappointed in my high school that they never picked it up in the 5 years I was there. So when I got to UFS and discovering that I’m dyslexic, I was put on the special programme and my varsity years were extended.”

“It was very painful for me to discover that so late in my life and my family did not believe me. They thought I was just not doing well.” Lungi says. In her first semester when she realized she wasn’t doing well in some of the most basic modules, she sought help at the Health and Wellness Department on campus. They then sent her to a psychologist who conducted a series of tests on her and then sent her to do another reading and writing test and that’s when they made the discovery that she has dyslexia and they then had to move her to the disability units. “It was very sad. I cried because I did not see anything wrong with myself” she said.

She had several tutors at her disposal while at the disability units who helped her do very well in her studies. During all of this is also when she discovered that she has bipolar disorder, and although she’s not a ‘pill’ person, she figured out a way to cut down on her medication and manage her episodes. She always says “I may have bipolar, but I am not bipolar”.

On what prompted her to seek help and get diagnosed with bipolar disorder, Lungi says it’s attributed to the trauma inflicted on her from having been raped by one of her cousins when she was in grade 4. When she had first reported the incident to an adult, she was told she was just imagining things so that’s why she blocked it out and didn’t take it seriously even though it happened more than once. Her mother had already moved to Bloem at the time so she couldn’t tell her either. In grade 9 she had a breakdown and that’s when she told one of her friends about the ordeal and her friend explained to her the intensity of the offence and encouraged her to tell her mother. She had had such a bad breakdown that she walked from Eunice to Charlotte Maxeke street, formerly known as Maitland street downtown, to SAPS head offices where she told her mom what had happened to her as her child. Her mom broke down and that’s when her process started when her mother took her to a psychologist. After confiding in her mother, Lungi fell into a deep depression which led to a bipolar diagnosis.

On the challenges she has faced as a model, she says “not getting paid, being exploited, people saying they will do something and not following through with their promises”. However she says that everything she has gone through has made her develop thick skin so comments such as “you’re too skinny” or “you don’t have the right bone structure” literally just bounce off her.

Her proudest achievements include Miss Glamorous, where she gained a sponsor from TVL which still dresses her today as she’s the face. She also became the face of Tellen Management from her Miss Glamorous days, which opened a lot of doors for her. She then started to do only ramp work and then model of the year for Free State Fashion Week in 2017 and became the face of Free State Fashion Week in 2018. Lungi was recently crowned Miss Free State on the 1st June 2019. Personally, her biggest achievement is that the work she does is very different and extraordinary.  Her older sister is her biggest inspiration because believes that her sister has faced so much adversity but still has so much drive and lust for life. Her sister is also her biggest cheerleader.

Lungi says her perseverance and resilience is what makes her a woman who rocks. At some point in varsity, her parents had lost faith in her and would not pay her tuition fees and she decided to get a job, and she still passed. Her dreams include being on the cover of GQ magazine and representing the Free State on an international level.